Located 4 km from Soultz-sous-Forêts, between the municipalities of Hunspach and Ingolsheim, the Fort de Schoenenbourg is one of the most important works of the Maginot Line built between 1931 and 1935.

One of the most important works of the Maginot Line

Its mission, with the support of neighboring works, was to prevent a possible enemy intrusion into northern Alsace and more particularly an advance of German troops through Wissembourg towards the south, during the Second World War.

This plain structure, whose two imposing entrance blocks are still visible in the heart of the Hunspach forest, is buried at an average depth of 22 meters. It presents a 3 km long network of galleries connecting the various living, service and combat spaces.

It could accommodate up to 630 men and after a few false alarms it was on August 24, 1939 that it was permanently occupied.

The fort could accommodate up to 630 men and after a few false alarms, it was the August 24, 1939 that he is permanently occupied.

The crew of the fort is then mobilized, in view of the declaration of war which intervenes a few days later, on September 3rd. The first months of the conflict were relatively calm, it was the "phony war" and it was not until May 14, 1940 that the guns of Fort de Schoenenbourg were heard thundering in a sustained fashion. Indeed, the turrets of the 6 combat blocks of the fortress were put to the test by the German troops for a few days, but they held firm and when the armistice was signed on June 25, 1940, the work of Schoenenbourg which fired 17 shells still resists. 000er July 1940, five days after the armistice, it was on the orders of the French High Command that the 630 men surrendered and abandoned their fort, which was nevertheless undefeated.

The opening and visit of the fort to the public

The Fort de Schoenenbourg benefited from an extensive restoration campaign starting in 1982 which enabled it to be opened to the public some time later.

Since that time, it is possible to see all the original facilities still in place. The self-guided tour takes place on foot over a 3 km course for at least 2 hours and at a temperature of 00°C. The barracks in which are installed the dormitories, the kitchen, the infirmary, … allow to imagine the life of the soldiers. The technical installations such as the power station, the ventilation and air filtering systems are proof of the modernity of the construction. Finally, the combat blocks bear witness to the ingenuity and effectiveness of this exceptional line of defence.

The discovery of the outer parts of the fort

To complete this visit, an outdoor route of 4 km (duration 1h30) was made, marked with a yellow ring.

Departing from Hunspach, it allows you to explore the tops of the Fort de Schoenenbourg, to understand its strategic situation in the defense of the territory as well as the challenges of the establishment of the Maginot Line in the north of Alsace. The turrets of the 6 combat blocks are within sight, imposing and at rest, in an unexpected calm. Certain points of view offer an exceptional panorama both over the plain of Alsace and over the hills of the nearby Northern Vosges. 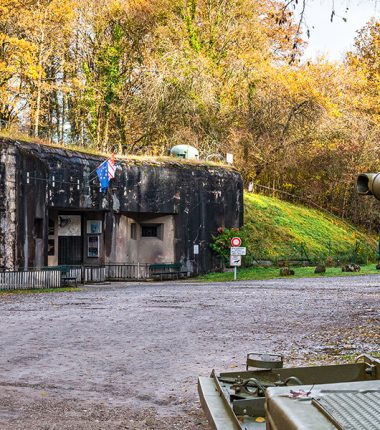 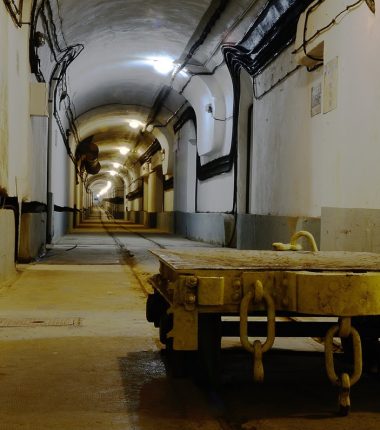