Located in the far north of Alsace on the immediate border with Germany, Wissembourg, a border town with Germany, is a gateway to the Regional Natural Park of the Northern Vosges.

Originally, the foundation of the Abbey of Saint Peter and Saint Paul

Wissembourg was born from the foundation of Saint Peter and Saint Paul Abbey on an island in the Lauter in 660, which over the centuries became the most important in Alsace. The construction of the Romanesque church, of which only a bell tower-belfry remains today, dates from the 11th century and is worth to the city to be listed as an essential stage of the Romanesque Route of Alsace. Altenstadt, associated municipality of Wissembourg since 1974, houses another jewel of Romanesque art: St. Ulrich's Church which dates from the 11th century also and which by the simplicity and the robustness of its lines remains a magnificent example of this religious art.

From 12th century and throughout the Middle Ages, the town grew rapidly around the abbey which was equipped with a defensive wall and an imposing tower called Schartenturm. The city of Lauter, formerly run by the prince abbots, gradually freed itself from their tutelage and enjoyed great prosperity over the following centuries. A new urban wall is erected to protect the city and its suburbs, giving new limits to the city, going well beyond the primitive walls of the abbey.

From the end of the 15th century, the people of Wissembourg suffered from successive wars and looting by brigands, the best known of which was Hans von Trotha, Lord Palatine who terrorized them. Hans Trapp, the legendary Alsatian Christmas character so dreaded by children, is a reincarnation of this frightening man of war who raged in Wissembourg and its region at the time.

This fortified town is an unmissable stop on the Romanesque Route of Alsace, as well as the Route of the Castles and Fortified Cities of Alsace.

A proliferation of labels for the municipality

A former fortified town, Wissembourg is today the gateway to The Route of the Castles and Fortified Cities of Alsace. The perfectly preserved vestiges of the ramparts which ensured the protection of the city and its inhabitants during these troubled times, are visible on the occasion of a splendid walk in the green belt of Wissembourg. They form a composite whole reworked over the centuries which has been protected by additional registration as a Historic Monument since 1933.

Since 2009, Wissembourg has also been a member of the network of "100 Most beautiful detours in France », a label awarded to small French towns for their beauty and charm. Wissembourg has managed to preserve a remarkable architectural heritage over the centuries, witness to a rich past and perfectly highlighted today.

The must-sees of the city

Among the essentials, the house of salt, a former bourgeois hospital whose construction dates back to 1448, impresses with its proportions. The Bruch district, a former marsh which shelters some beautiful constructions including Friend Fritz's House (16th century) located on the banks of the Lauter, is full of charm. Not far, don't miss Saint John's Church and its North German-inspired organ, built by the Belgian manufacturer Thomas and inaugurated in 2015.

Do not hesitate to enter Saint Peter and Saint Paul Abbey to discover the cloister and the Romanesque chapel which houses a reproduction of the Christ of Wissembourg (c. 1060), the oldest known intact figurative stained glass window in the world.

two steps away, Stanislas Palace placed at the disposal of the Polish king in exile whose daughter Marie Leszczynska married Louis XV on August 15, 1725. Finally, push the door of the Tithe Barn, this former corn exchange whose facade served as the enclosure of the abbey church and which now houses the Alsace Verte Tourist Office. 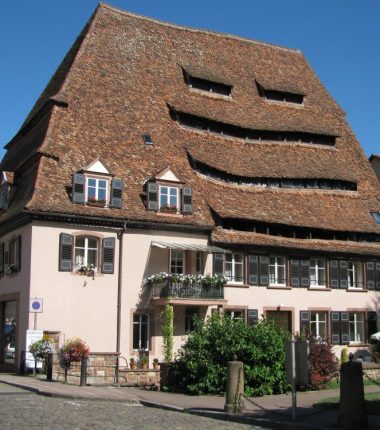 The House of Salt 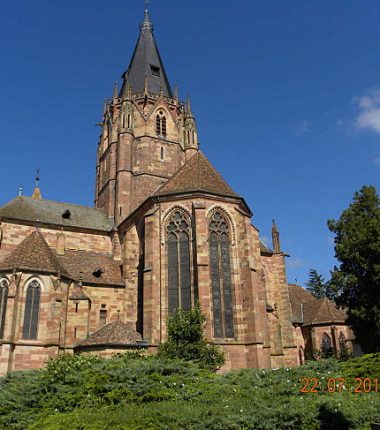 The Abbey of Sts Peter and Paul