Alsace is a land of character, warm and welcoming where authenticity and friendliness are the key words. Is it by chance that our region is at the top of the most welcoming regions in France or if our villages are labeled, awarded and rewarded? Certainly not ! The love we have for this corner of France is felt throughout the country, abroad and internationally. Many visitors flock each year to experience and learn about Alsace.

The same goes for Alsace Verte, our territory! Alsatian culture is an invitation to celebration and sharing. Dialect, cult products, folklore and symbols make visitors dream but above all thrill the hearts of the inhabitants who are proud of their region and its riches.

One of the markers of Alsace is undeniably the architecture of its traditional half-timbered houses. While they appear colorful in the Haut-Rhin, near Ribeauvillé, Riquewihr or Colmar, in the Bas-Rhin and more particularly in the northern sector, in Alsace Verte, they have kept their natural color linked to lime. , i.e. white. Sober, delicate and chic, these half-timbered houses have made certain villages known as “white” famous. They are most often located a few kilometers from each other and present a perfect alternative to major highways.

Here, time seems to have stopped and one would almost expect to meet a beautiful Alsatian woman wearing her traditional headdress and costume, at the bend of a farmyard... Here it is, there is so much to learn, to explore. We can only encourage you to think outside the box in order to discover the particularities of the villages and decipher the many symbols in the half-timberings. From North to South, from East to West, you will be charmed. We are also not surprised to hear the Alsatian dialect still commonly practiced in these small towns, at the turn of the conversations.

Do not hesitate to go off the beaten track to discover the particularities of the villages with their elegant and authentic half-timbered houses.

Most Beautiful Villages, favorite village of the French, unique half-timbered church in Alsace…

The common characteristic of the villages of Schleithal, Hunspach and Kuhlendorf is their originality. Schleithal, a few kilometers from the border with Germany, is a village-street, built on 3.5 km along its main street. This constitutes a regional record and is worth to the commune the title of longest village in Alsace. The town of Hunspach, labeled one of "Most Beautiful Villages of France" since 1982 and elected Favorite Village of the French 2020, has houses with curved windows that allow you to see without being seen. Finally, Kuhlendorf is a small village which holds an architectural treasure: the only half-timbered church in Alsace dating from 1820, listed as a historical monument.

All our villages are worthy of appearing on postcards and in particular Seebach considered one of the most beautiful and harmonious from the architectural point of view in Alsace; Hohwiller, one of the few in Northern Alsace to be labeled 4 flowers to towns and villages in bloom; or even Oberbronn, a former winegrower's town which has kept a special character with its picturesque alleys, with the oldest houses in the territory of Alsace Verte, some of which date from the 17e century. To Hoffen, rue du tilleul has a long succession of half-timbered houses where geraniums, an institution in Alsace, adorn the balconies and form such a photogenic ensemble. Finally, to Obersteinbach, climb the Wachtfels rock to admire the view of this village nestled in the heart of the Northern Vosges Regional Park.

The identity of our territory is also due to our craftsmanship and our heritage. To Betschdorf, in addition to farm buildings dating from the 18th century, there are pottery workshops. The creations, varnished with salt, are recognizable by their colors, Cobalt blue and grey. To Cleebourg, a wine-growing village, gateway to the Route du Vin, 6 grape varieties are produced, mainly white wine, the star of our aperitifs and meals. All of our traditions, habits and customs are visible at the Maison Rurale in Kutzenhausen and the House of Offwiller in the village of the same name. 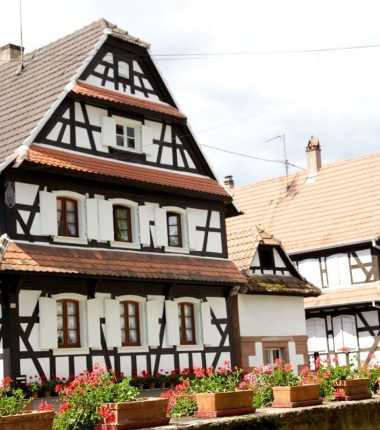 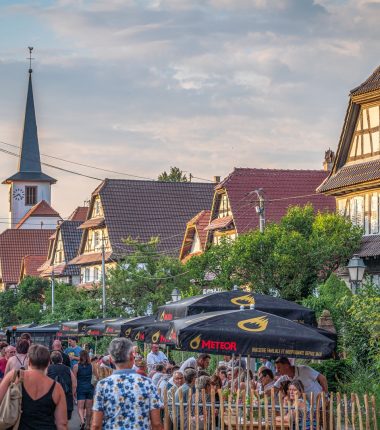 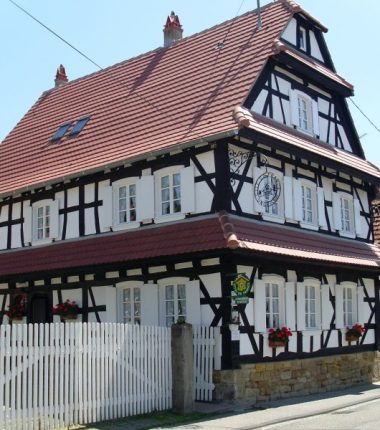 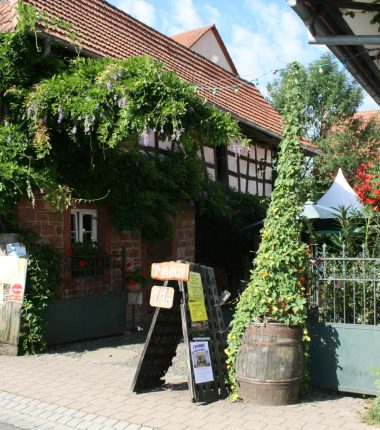